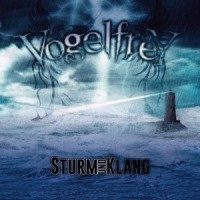 When you think about German medieval folk rock, bands such as In Extremo, Subway to Sally and Saltatio Mortis immediately come to mind. But among the great variety of German folk (metal) bands, one band from Hamburg has always stood out with a unique sound of their own. Vogelfrey has managed to create a cheerful combination between medieval folk rock with metal elements, that is sure to get your feet moving and your head banging in no time. With ‘Sturm und Klang’ the sextet from Hamburg releases its third studio album to date. An album that fits in well with the bands repertoire; not too complicated but infinitely catchy!

The album kicks off with ‘Sturmgesang’, a mid-tempo song that is drenched with the typical Vogelfrey sound. The heavy riffs complement the delicate violin melodies perfectly, and make the cello and violin stand out pretty well. In combination with Jannik’s characteristic vocals the first track sets the tone for the rest of the album, that is best described as diverse and solid. The album continues with ‘Tandaradei!’ and ‘Hörner Hoch’, two songs that are guaranteed to lure you onto the dance floor. Both tracks have a very high sing-along factor, and are bound to do well on alcohol soaked festivals and concerts. And speaking of alcohol, titles such as ‘Alkoholverbot’, ‘Abschaum’ and ‘Gold’ are exactly what you would expect from a Vogelfrey album titled Sturm und Klang. Themes based around crime, piracy and excessive alcohol consumption are therefore clearly present on the album. But it’s not just the typical drinking songs which are so typical for the band. With ‘Nachtgesang’ the band treats the listeners to a small breather in the form of a ballad. Jannik’s deep vocals are a wonderful addition to the acoustic song, which has a highly emotional feel to it. Tracks such as ‘Der Chirurg’ create a slightly darker atmosphere compared to the other songs on the album. The metal elements combined with the melodramatic cello and eerie violin melodies create an intriguing and mysterious whole, that differentiates between the separate instruments smoothly. Although the album has no real highlights, the separate songs stand out well enough on their own, and prove once again that despite the genre cliché’s, Vogelfrey is a force to be reckoned with.

For a third studio album, ‘Sturm und Klang’ is definitely a great addition to the band’s repertoire. The right balance between medieval folk and metal define the band from so many others within the genre and ensure that Vogelfrey stays interesting and entertaining every time you listen to their songs. If you are a fan of medieval folk rock this is a shot right up your alley, but ‘Sturm und Klang’ also offers a lot for fans of louder music. Vogelfrey have remained true even on the new album and continue their line of work throughout all of their tracks. Give the album a spin, pour yourself a nice flagon of mead and Hörner Hoch!!