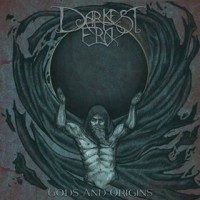 Whether you like it or not, if you are an Irish folk metal band you will get compared to Primordial or Cruachan…. it is that simple. Such is the case with Darkest Era hailing from Northern Ireland with their latest release; an EP entitled “Gods And Origins”.
First things first, I would not call 2 songs an EP but a single/ B side but that is just my opinion. As far as whom they compare to, I would definitely say more towards Primordial but I feel they are more straightforward metal and not as dirgey, doomy or black metal as Primordial is but they have a similar feel to them…hard to describe but it is there. If you have heard their last album/release (2014’s “Severance”) then these two presumably new songs could have been on this release for sure. “An Dagda” has a build-up into the main part of the song which is pretty decent and solid. Krums vocals are on par with everything previously as are all the performances by the band here.
The 2nd track “Elohim” starts with some nice acoustic guitar/vocals with some percussion and stays there for the entire track which will definitely give you a glimpse into their folkier side. And with that the EP is over, at less than 8 total minutes do you see why I would have a hard time calling this an EP? A couple of nice tracks here presumably as a teaser for a forth coming album or release of some sort.
Not sure if this a necessity for your music collection but the tracks are as good as anything from “Severance” so not a huge risk here…..