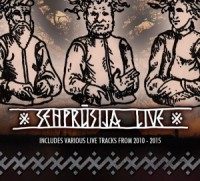 Latvian Pagan/Folk-metal band Skyforger celebrates their 20th anniversary this year. They released their album ‘Senprūsijá’ earlier this year, and now they released a DVD ‘Senprūsijá Live’. The discography of these guys isn’t very long, but they delivered quite a lot nice songs over the years. And it’s difficult to maintain a line-up over such a period of time, Skyforger couldn’t escape from some member-changes as well.

This DVD has a nice dark-brown cover, we see a dark oak in the mist with a painting of three men in front. It has this nice ancient pagan feel, which is so represented by Skyforger.
Starting the DVD, brings us in a menu where we have two choices, and I don’t mean the obvious ones ‘play all’ and ‘chapters’, not they are there as well, but we can choose between ‘Senprūsijá Live’ the release-concert of their latest album of ‘Various Live Songs’.
The ‘Senprūsijá Live’ part is the axes of this album. It’s a registration of their concert 15th May in Riga. We get to see ‘the modern Skyforger’ here. As we can hear on ‘Senprūsijá’ their music is more pagan, with less folk-elements. The bagpipes, kokle and pipes by Kaspars Bārbals are gone, for a large part. Besides a lot of songs of the new album they play their all time hit ‘Migla, migla, rasa, rasa’ of course and in this one Peter picks up the kockle. This sounds very nice, and I’m glad they still can play such great songs live.

After this concert we get the videoclip of ‘Melnās buras’.

Then we go back to the main menu. And you can leave it there, but you can choose ‘Various Live Songs’ as well. Now we get 14 songs played live at various occasions from 2010 to 2015. In the older ones, the first three tracks, they still have Kaspars on board which means we’ll get to hear more authentic folk-instruments. The first two tracks are from their ‘Kurbads’ release-concert, at these kind of concerts there are often nice guest-musicians and in ‘Jūras dziesma’ we get to see and hear a lot of additional musicians playing kockle and bagpipe. This is delicious in my opinion.
We don’t only get to see Skyforger in old Latvian clothing but in army costumes as well, these guys are proud of their country. Not only in the ancient times, but fighting against the Germans in the past as well. The last track ‘Uz kariņu bāliņš jāja’ is played at an event in honour of the foundation of the Latvian riflemen battalions.

Great DVD in which all fans are served! Do you like their sound with the folk-instruments most, then you have a great item, with some very nice recordings, with the second part of this DVD. Do you like the sound of their latest album, you’ll get a lot of those songs live in the first part of ‘Senprūsijá Live’.
But I say: love them both, they’re not that far apart and these guys are just as awesome as this DVD shows.