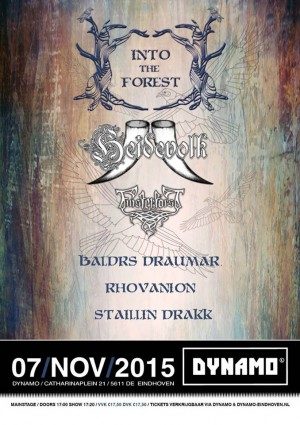 The second edition of the Into The Forest festival in Dynamo Eindhoven, The Netherlands. After a successful first edition last year the festival (hosted by good friend and former folk-metal.nl colleague Nick Roovers) gets a sequel. This year the line-up has improved and the crowd has grown a lot. Also in the big lobby of the Dynamo is a awesome market with a lot of Viking must-haves and good old fashioned metal shirts.

Stàillin Drakk
Kicking off this new edition are the local superheroes from Stàillin Drakk. I guess most people know Gloryhammer, this is a similar kind of band, but credit where credit is due, they’ve got better vocals.
Getting on stage as knights, kings, wizards and well of course, a dragon, they start playing some very catchy power-metal tunes. At first there aren’t many people in front of the stage but during the set it gets pretty crowded. After seeing these guys a few times before I must say they’ve grown a lot. The set is polished and smoother than before, the sound was very good and the biggest improvement is vocalist Samuel getting real confident on stage.
All in all a very good beginning of the day.
Rating: 7.5/10

Rhovanion
Rhovanion, Rhovanion, the land of the wild. Well, that was wild. I didn’t really understand some things though. During the sound-check frontman Rick asks for a line-check, dismissed by his band-mates. When they get on stage, the sound is terrible for most of the set. There where drums, rhythm guitars and bass. Vocals, gone, backing vocals, nowhere to be found. Lead-guitars… I don’t know. Also flutes and violins on stage but couldn’t hear them. Very shameful. Usually I have a lot of fun with these guys but with the very loud sound and terrible mix they have today I was very disappointed in them. There were as always the known Rhovanion songs to party to, this time they also brought something from their upcoming album. I hope I can hear the song soon because I don’t feel I have right now.
I’ll see you guys soon, and hopefully as good as you usually are.
Rating: 6/10

Baldrs Draumar
The Frisian warriors from Baldrs Draumar enter the battlefield. Armed to the teeth with stories about Frisian kings Aldgillis and his son Radboud.
A lot of smoke cover the stage with some dimmed lights. We only see their appearances in the mist. After a great intro, suddenly, violence. Koppen yn ‘e mist, (Dragonheads in the mist). Radboud has landed on Iselhiem. From the first second the sound of these guys is great. With Baldrs Draumar comes the first of the more serious performances of this evening. For the first time they bring their own sound and light engineer, and it shows! The smoke and the lights are done very great. Also the dynamic on the stage of these guys is very good. Changing positions as they go with always the right man in on the front. Slowly from the landing of Radboud on his year away in his young life unto the assassination of his own father Aldgillis Baldrs Draumar tells us the entire story. The lyrics are (mainly) in Frisian which sounds very awesome. Also it causes no-one, especially no Dutch people, to understand what they’re saying. Great show, and I certainly look forward to the next one guys!
Rating: 8.5/10

Finsterforst
Co-headliners of today are the guys from Finsterforst. As always covered in mud when they get on stage. Bringing some heavy “black forest metal”, they are the only band not from The Netherlands this evening. Their typical sound with both a keyboard and an accordion is widely known and I don’t feel I have to explain this any more. From the very first note to the last their sound was very, very good. Also these guys looked like they had a lot of fun performing which also made it awesome for the crowd. They of course played their famous Mach Dich Frei and the almost as popular Zeit für Hass. In the end of course they will have to do Försterhochzeit as well, making the setlist complete. The crowd goes along with the band very well. After seeing Finsterforst several times with great shows in the past, this might be the best I have seen of them so far. Finsterforst, without question, was the highlight of the evening.
Rating 9/10

Heidevolk
The Headliner of this evening was supposed to be Heidevolk, there were some guys on the stage and they did play the songs, but after almost everyone leaving the band it will never be the same again. Starting with Winterwoede it didn’t take long for them to make clear how fast the ship has sunken. Kevin Vruchtbaert was replaced by some other guitar player who did a great job at not playing the right parts during every song, which was terrible to hear. Also Jacco from Conorach who has been replacing Mark for the time being is still there, last time it seemed okay just for a while. It is about time now for Heidevolk to find real replacement, the vocals of Jacco just don’t fit the music Heidevolk used to make. Also with Lars vocals that are a bit lower than Joris used to be the gap between the two voiced is just too big. Good thing this show was, they brought the ladies and gentlemen from Sneeuwstorm Ensemble again, this stringed quartet has also played on the last Heidevolk album, Velua. Unfortunately they were so soft in the mix it was very hard to hear any of them. The fourth song they played was Het Wilde Heer, I knew Heidevolk from the days this was a new song in stead of one of the oldest. I thought I knew what it sounded like, but it took me 30 seconds to recognize it. I don’t know what their guitarist was doing but it didn’t came close.
After they also wrecked my favourite Heidevolk song of all times (Wapenbroeders) I couldn’t take it any more.
Never the less, the crowd was drunk enough so it would probably be party all the same. But for me that’s not what a show is all about so I’m sorry, couldn’t make any more of it.
Rating: 5/10