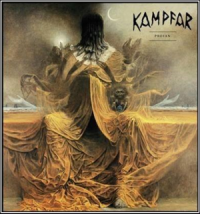 Only one year after releasing the well praised Djevelmakt, Norwegian Kampfar is back with their seventh full length album. Is it pagan metal, black metal, folk metal? They are in a niche of their own. If you would put Taake, Enslaved, and Vreid in the blender and add a bit of bombast, Kampfar is pretty much what you would end up with. Nice to have a band that combines the good stuff of other bands and then put their own stamp on it.

The unmistakable Dolk take us by the hand, screaming, screeching and occasionally with clean vocals. The production, as on Djevelmakt and its predecessor Mare, is again very clean. Not trying to sound hollow, because that is the book of black metal prescribes. Just a bit of echo on the snare-drum, which is fitting exactly within the sound of the band. Plenty of double bass, but most of all music that you can understand. Not overly complex, yet enough speed changes to keep it interesting. In fact the fast parts are guaranteed to create a moshpit, while the slower parts give you a little time to breath. It isn’t about speed, though. Or about slow music. Kampfar is not a thrash or doom band, they are Kampfar and use everything they can to make interesting music.

And interesting it is. The length of the songs vary from 4:31 (Gloria Ablaze) to 7:35 (Skavank). The longer the song, the more aspects it contains. If you like the last two albums, you will definitely like this one as well. There is not a weak song on the album. Best song? For me ‘Daimon’. This song has got a lot of stuff I like in my metal. Speed, aggressiveness, great screeching and clean vocals, a wall of sound, a constant threat in the background.

So, what’s keeping me from giving a higher grade? Well, it’s so much in line with the last two albums, that I am missing a bit of progress. Personally I like bands to change, not because of change in itself, but because they are becoming better musicians or finding new inspiration. Most of the songs on ‘Profan’ could just as well have been on ‘Djevelmakt’ or ‘Mare’. Since these albums are rock solid, it’s not a big problem at all. But I wouldn’t mind if the next album would show some more surprises.