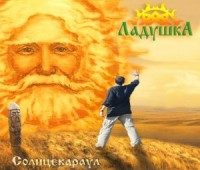 Ладушка (“Ladushka”) have recently released their debut album entitled “Солнцекараул” (“Solncekaraul” engl. To Meet the Sun). Hailing from Russia, Ladushka have seemingly just appeared and released an album without any sort of prior demo.
I guess a demo really isn’t a necessity when you can release a pretty solid debut effort like this. Stylistically, I want to compare them to Grai, Zaria and Dalriada as acts with female fronted vocals but more accessible and not as heavy but still leaning towards metal. They are a five piece unit (vocalist Natalia, bassist Vladimir, Guitarist Konstantin, Drummer Pavel and Bayan (Accordionist) Andrey)and have put together 7 tracks on their debut here with a total running time around 28 minutes. The tracks, all in all, are decent and have more synergy than most debut tracks, they sound like they have been together a lot longer than a year or so. The folk metal is straightforward here, never straying too much into just folk or more extreme metal, right down the middle which is good from an accessibility point of view. However this may not allow Ladushka to stand out from the crowd as it tends to start becoming background music more than serious, need-to -listen-to music. This is where maybe a demo or initial EP could have helped gauge the folk metal waters for them a little bit and help with some direction.
Don’t get me wrong, this is a strong first album and definitely deserves a listen. I think the musicianship is definitely there for sure, just a matter of Ladushka developing a distinctive sound/personality to garner some more attention. The production/mix here is on par with the music as it has decent separation of instrumentation with everything clear and distinct. Give it a listen…I think you will feel the same as me, Ladushka play some solid folk metal and have done a good job on their debut.