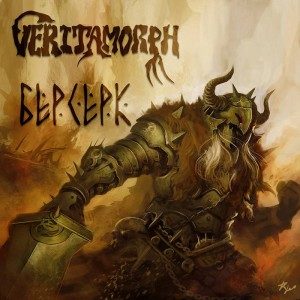 Veritamorph has an new album out. ‘Berserk’ is their first full length, they have released an EP earlier this year, which we reviewed as well here at folk-metal.nl. Jeff’s conclusion was at that time it wasn’t very folky, and that’s exactly why this album remained on our pile of disks for a month again. We love a lot of genres, but the whole team is in here for the folk and there isn’t any at this album. Like on their previous EP, the track ‘Veter’ is the track with the most folky feel. And I can hardly call this folk-metal.
Another comment on their EP, was the sound. That band obviously worked hard on that aspect. ‘Berserk’ sounds a lot better. The home-made sound is gone and the production is a lot nicer. My compliments on this improvement, they have done a nice job with this.

So, remains the lack of folk on this album. Occasionally we do some reviews out of our spectrum, but those albums are often Vikingmetal or Epic-metal, this albums isn’t in one of those genres. I would say this album is trashmetal and I doubt it if the band should change this, they seem quite comfortable in this genre. I would like to say to them: ‘Skip the Folk-tag’ and go on with what you’re doing.

If you’re into folk only, you can skip this album. But if you like trash as well, give it a try, you can listen to the whole album on bandcamp.