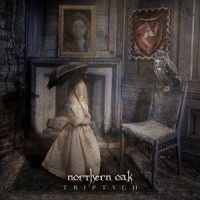 For you diehard Northern Oak fans, this new EP from these Sheffield Englanders may not offer much in the way of new material, especially if you contributed to the Kickstarter campaign for their last album “Of Roots And Flesh” from 2014. This EP contains a total of three songs and three instrumental versions of the same songs released as a bonus/reward for contribution to the recording of “Of Roots And Flesh” but for those that didn’t, this is a nice re-introduction if you will into Northern Oak.
If completely unfamiliar, Northern Oak has many layers to its sound from earlier recordings like “Tales From Rivelin” from 2008 which I felt had a gothic/medieval vibe to it. 2010’s “Monuments” was next which added some more black metal and symphonic touches. Finally to “Of Roots And Flesh” which heaped on some added folk and progressive elements. Now to “Triptych” we see the culmination of all the eras of Northern Oak is one neat package that may have shown they have plateaued to a spot where they may live for a while, not a bad thing at all, think of it like the wanderer finally finding a home. I instantly want to say Primordial and Opeth as two contributors to their sound with a dash of Deep Purple and Jethro Tull, what’s not to like? Subject matter for the tracks were suggestions given by presumably contributors to the Kickstarter campaign and they have a different feel about them for some reason, even though they were apparently written at the same time as “Of Roots And Flesh” or shortly thereafter.
First track “The Court Of Owls” starts kind of Gothic with the keys but as the guitars come in and the tempo increases the folk creeps in and it gets darker by the minute… great opener. Next track “Ellan Vannin” starts with more of a symphonic/soundtrack take before the folk metal takes over once again and then full on blast beat which will shake the cobwebs off you in a heartbeat. At 10 minutes, this may be the quintessential Northern Oak track as it has it all. Third, and sadly last track, “A Portrait” continues with what the first two tracks started, balancing between introspective parts and raging parts perfectly.
Yes I know this isn’t really the last track, following the first three tracks are instrumental versions of the same tracks. Definitely interesting to hear the tracks without the vocals to let the musicianship stand on its own but not sure if entirely necessary, but a nice bonus nonetheless. At a total of 48 minutes this will certainly fill up more listening time than an average EP.
This is available on their Bandcamp page with lyrics and explanations of the songs and who suggested them which helps put it all in perspective. Along with Vesperia and Grimner, this is probably one of the best EP’s of the year, great release.