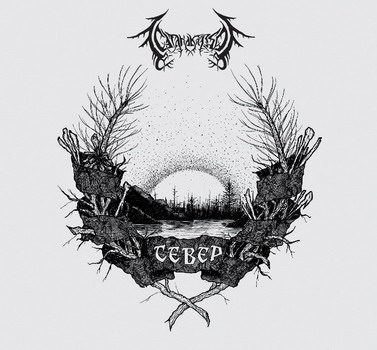 The new СатанаКозёл (“SatanaKozol” or “SatanGoat”) album has finally been released as of November 5 on the mighty Sound Age Productions. Entitled “Север” (“North”) this is first full length from them in almost 5 years following 2010’s “Солнце мёртвых” (I am translating as “The Sun Of The Dead”). The five year layoff hasn’t slowed them down at all but has probably made them more focused and they have created their best album to date. I think with a name like “SatanGoat” you would probably instantly think Black Metal but actually I want to compare them to a blend of Finntroll, Rogatiy Kolokol, Trollfest and Svartby so they live in the folky/trolly/thrashy realm which is definitely super-duper for me.
From their beginnings in 2004 with a basic demo to now they have shown amazing progress in refining their sound and not relying on having to be hyperspeed fast all the time. The maturation process is also evident in the amount and lengths of the tracks…..most of the newer tracks average 5 plus minutes in length. You will get your dose of speed in opening track “Чужие” (“Strangers”) but at over 8 minutes this breakneck style can’t last and they move to a mid-paced style which works really well. There is more conviction in the following tracks and thoughtfulness, don’t get me wrong as this is not some philosophical exercise from them but just a slight change in style which is still heavy, meaty and a fun listen, case in point a track like “Партизанская” (“The Partisan Song”) throws a little bit of everything at you from the fast tempo to the accordion to semi-surf style and quirky riffs and keys and thwacking bass…..chock full of fun.
Tracks like “Враг” (“The Enemy”) and “Медведь” (‘The Bear”) show a more accessible side to them without being a sellout of any sort but just not being afraid to try something different and they all work and still have their signature style. The title track just may be the most “epic” song they have ever written with an Immortal vibe to it….given the title is “Север” (“North”) it is spot on. The rest of the tracks here show the same “putting it out there” sort of feel….. great songs that stray into some new waters but never being too far from shore. Don’t be afraid of the name which may be the only thing that could possibly hold them back because of a false idea of what they are……nothing could be further from the truth.
SatanaKozol play high quality thrash/folk on par with any of the best and coming out of the 5 year hibernation has done them well with their finest wok so far let’s hope we are not waiting another 5 years for the next one, great album.