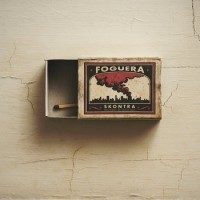 After five years and changes in band members, the Spanish guys from Skontra released your new album ‘Foguera’ (bonfire). Of the 13 tracks, two are covers – from RIP and Xéliba – and one acoustic version of the album’s theme ‘Foguera’.

The social themes and the pride of band’s region, Arturia, remains strong as ever. In terms of musicality, the album is more Punk/Pop-Punk than Celtic, with others influences, as Mexican music (the track ‘Nesi furgon’ have an amazing participation of a trumpet player) and reggae (‘Otra oportunidá’). The bagpipes also gained more prominence and quality in the songs.

The best are ‘EI 34’, a song about the Asturian revolution – cover song of Xéliba – and ‘Sal a la cai’.
‘Foguera’ also has an incredible cover art: minimalist, creative and brings whole spirit of the album