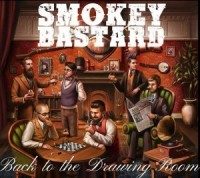 AR-CHI-PE-LA-GO! I’m sure that the opening song of the new Smokey Bastard’s album will glue in your head for a week or more. The new album ‘Back to the Drawing Room’ is the third of the band, four years after the awesome ‘Tales From The Wasteland’ (released in 2011).
After the amazing ‘Archipelago’, the album continues with ‘Rats’. Certainly, the best tracks of the album.
‘Baba Yaga’ have an interesting feeling – Tells the dark story of a mythical (and weird) creature (of the same name) from Slavic folklore with incredible mixture of influences and rhythms, from gypsy to latin music (sometimes you can feel Gogol Bordello here).
‘Faster than Light’ and ‘Screens’ have nice punk passages, speeding up the rhythm of the album.
In track no. 6 ‘South Autralia’ is a great surprise: acapella version of a traditional sea shanty made by the Pogues. ‘Rotter’ and ‘ Alcobatical’ are most close to ‘pop-punk’.
The album ends with ‘Jester’ and ‘Can of Worms’.
The cover art is amazing as usual!

Back To The Drawing Room keep the high level of Smokey Bastard with greats tracks, charged with enthusiasm in a ‘folk-punk-progressive’ style.