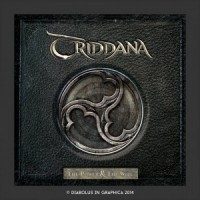 Power folk metal from Argentina. Which band springs to mind? Skiltron of course. And what do you know, two of the current members of Triddana used to play in Skiltron. No wonder that the music is somewhat similar. ‘The power and the will’ is the band’s second full album, but only the first to be released in Europe.
Triddana leans more towards power metal than Skiltron. Now, I don’t mind a bit of power metal. Most of the bands know how to play their instruments and I like the fast pace that often goes with it. I am not ashamed to admit I enjoy Rhapsody (when there was only One), Ancient Bards and Derdian. Triddana add bagpipes in the mix, automatically waking up folk metal lovers. But the bagpipes alone don’t turn power metal into folk metal. Folk is mostly in the melodies. And I can’t find much in terms of folk melodies on this album. Not until the third song anyway. ‘Death blow’ does include the sort of lines you would find written by cavemen in Scotland, millions of years ago. This song also include flutes, a didgeridoo and some acoustic elements. And yet, the power metal feel prevails. In this particular song it works very well. The voice of singer Juan José Fornes fits like a glove. It’s not harsh, bit it’s metal allright.
Where it works on ‘Death blow’, it doesn’t convince throughout the entire album. Hearing the album several times, I am left with the feeling that the bagpipes are playing the same tune more than once. The singer is nice to listen to, but not so in the slower songs, like ‘Echo through the days’. Here it is rather plain and the song in its entirety is not very memorable. And this is a bit of a problem. The album is too long and not going in a clear direction. Now, I am not saying they should either play power metal or folk metal. But whatever you play, do it with everything you’ve got. Listening to a song like ‘Everything returns’ it feels like the band is holding back a bit. You can’t do that. Be fast when fast is required, be aggressive, melodic, folky when it is called for. And bring it with heart and soul. In my humble opinion, the folk parts are the best. The start of ‘The snake and the pit’ promises a nice folk song, before becoming rather standard metal. Brought nice, played well, produced good, but not standing out in any way.
And then, all of a sudden, there is ‘Galloping shadows’. Fearing to hear another standard power metal song by the look of the title, this one does stand out. It’s instrumental, it’s folky, it’s happy and yet moody. Strange to find one of the best songs to be the instrumental one, while the singer is not half bad at all.
All in all a nice album. Probably enjoyable played live. So, come to Europe, entertain us, choose your path and all will be well.