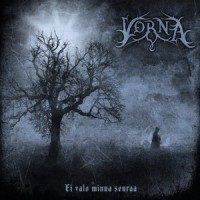 The new Vorna album is almost ready for release (December 4th I believe) but luckily we here at folk-metal.nl get to review it beforehand. Entitled “Ei Valo Minua Seuraa” (“No Light Follows me”) Vorna have surpassed everything they have done up to this point (3 demo’s and 2013’s “Ajastaika”) with this new release…..so much for the dreaded “sophomore jinx”. Stylistically I would say that on the previous releases they made me instantly think “symphonic black metal” with a touch of some folk but I think their overall sound has gravitated more towards a dark folk metal sound now but just slightly. Band wise maybe some old classic Dimmu Borgir and Woods of Desolation mixed with Moonsorrow, Thormesis and Tharaphita would be 5 bands I would Frankenstein together to get to the Vorna sound. Right from the start, the production has really been addressed with the mix being more up front across the board as all of the previous releases seemed a million miles away, a major improvement. There are seven tracks here clocking in at around 45 minutes with a few 4 minutes tracks, a few six minute tracks and a few 8 to 9 minute ones. The one word I had kept popping into my head while listening to this is “crossover”, I think this would appeal to the black metal fan as well as the folksters since it does a really good job of combining elements of both. I wouldn’t necessarily say there are any stand-out tracks or singles here but the songs are solid across the board. There is just a nice blend of some blast beats, keys and crunchy/smooth riffing along with the dread bearing vocals which makes for a complete package. If you have liked their previous releases then the latest one from Vorna will certainly blow you away. Solid musicianship, better production, tracks on par with previous releases plus expanding their musical horizons with a few different ideas…..a winning formula for a successful new release from this Finnish outfit.