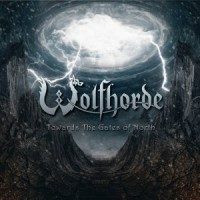 I recently discussed what I thought were the three sub genres of Viking Metal (Death/Black, Traditional and Progressive/Power) and thought that would be the end of it. Wouldn’t you know that someone would come along and not fit nicely into anyone of these? Yes that is what Finland’s Wolfhorde has done and probably has done since their inception in 2000, never made it easy to say they are a specific genre of anything.
Given their album art and track listing I guess Viking is as good as anything…..and it strikes me they are yet another genre bending band from Finland. Amorphis, Moonsorrow, Children of Bodom amongst others defy necessarily being a specific genre (go ahead and argue amongst yourselves now) and Wolfhorde straddle between numerous ones in the process. “Toward The Gate Of The North” is their 1st release since 2012’s “Nyvinland” EP and their first official full length…..even though 2010’s “Deathknot” is called an EP with 10 tracks on it, that is a full length to me but no big deal. We have 9 tracks totalling 44 minutes here including the obligatory instrumental intro track “Vegvisir” which leads into the remaining 8 tracks. Describing tracks from Wolfhorde as “Viking” is tough as there are elements of symphonic, progressive, classic metal/thrash and folk in almost every track, but not overly pretentious like some symphonic or progressive and straighter metal than most folk. There is a lot going on here and considering they are a 3 piece makes it even more impressive…..maybe a folk metal version Grand Magus mixed with some old TNT and German power metal sounds right. Whatever they are they do a great job of just being Wolfhorde. There are nice guitar and keyboard melodies throughout with catchy riffs, gnarly vocals, folky additions and nice tempo/beat changes to keep it all interesting. This probably isn’t as heavy as I was expecting with the recent release of a few death/black Viking titles (Blot, Immorgon, Valkenrag, etc..) so it has a nice spot all to itself in Vikingdom.
In addition, now being on a label (Inverse) has led to better production with a smoother all around feel which may have taken away a little heaviness and replaced it with just better across the board sound. If I was tortured into saying what my favorite track is here I would say “Bondless Agony” was the catchiest of the bunch along with epic 9 minute album closer “The Gates Of North” but all of the tracks have a similar stamp to them. If you are into all sorts of the Viking genres of metal then you will definitely find something here, or just metal in general as this may not be pure folk, Viking, pagan etc., only pure metal. Great release.