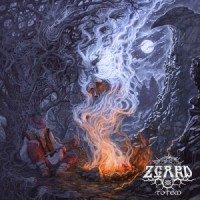 If you were just getting into the last Zgard release (2014’s “Contemplation”) there is already a new album looming on the horizon with 2015’s “Totem” due out at the end of November. When you are a one man operation like Zgard it could go one of two ways, either sporadic releases or consistent ones and thankfully Zgard is of the latter disposition. 5 full lengths plus 1 split in just over 3 years’ time of high quality pagan/black metal is remarkable and almost unheard of. You can thank Yaromisl for being so driven, focused and talented. I suppose the comparisons to Drudkh, Nokturnal Mortem and Khors would be the best bets for anyone unfamiliar, especially given Zgard’s Ukrainian locale.You also can’t forget about the epic Sivyi Yar, Saor or Midnight Odyssey for a comparison also being one man projects, more or less. “Totem” follows in the same tradition as previous releases by Zgard, steeped in mysticism and ancient ways, mid paced pagan and sometimes black metal with tracks averaging 8+ minutes in length…. epic indeed. Yaromisl has decided to take a backing and clean vocal perspective this time around with Dusk (STRYVIGOR, ENDLESS BATTLE) taking over main vocal duties. Dusk’s style reminds me of Atilla from Mayhem and works well in projecting the emotion of “Totem” with passion and conviction. Going back to the releases from 2012 (“Reclusion” and “Spirit Of Carpathian Sunset”) there has been progression with each subsequent release and “Totem” is no different……the tracks are more cohesive and focused, textured and spiritual. I think that over the last two releases, Zgard has found its voice and the proper way to convey the feelings thru the music. Take “Land Of Legends” as an example…..there is tons of atmosphere more so than the previous releases with choral backing vocals with a mix of folk instrumentation (Sopilka and Drymba amongst others) and blast beats. “Descendants Of The Thunder” is more straightforward but adds again the layered vocals.
The title track is probably the “folkiest” on the album but still rooted in pagan metal throughout. “Dark Lord Of The Carpathians” and “The North” besides being two of the coolest track titles of all time are maybe the heaviest tracks here, reminding me a lot of classic Satyricon. The rest of the album is on par with these tracks and at 62 minutes each of them doesn’t drag out for the sake of dragging it out, there is a purpose to the songs being the lengths they are to properly tell the story. While I wouldn’t necessarily call this a concept album, there certainly does seem to be a connecting thread throughout which to me is obvious upon listening. Most bands I think you will always here when they have plateaued or run out of ideas, after 5 albums, Zgard seemingly is just getting started in creating amazing music.
I don’t know if I would necessarily say the previous releases are necessities to your collection but worthwhile to have to hear the growth of the Zgard sound. “Totem”, however, is about as good as pagan metal gets and a must listen to for sure. Great album.