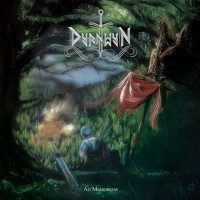 Following the release of their first demo “Fatherland” in 2013, we now have a new EP from Italy’s Dyrnwyn entitled “Ad Memoriam” featuring a total of 6 new songs, an intro, an instrumental and 4 new tracks. If you were to combine some of the folk attributes of Kanseil and Ad Plenitatem Lunae with the black metal vocal style of Selvans you might be close to the Dyrnwyn sound but I feel they are still in their own little space in between all of these amazing Italian acts.
Dyrnwyn take the stories and history of ancient Rome (their hometown) on this release and make a loosely based concept EP which has been somewhat done before by the soon to return Ex Deo, but their certainly is plenty of room for more of this subject matter for sure. I think the biggest hurdle most people will have to get over with Dyrnwyn is departing vocalist Thanatos’ vocal style, does it fit with the music here? In some cases yes and in some cases no, his gruffer vocals and switching to the higher screechy style is a tough one to mix back and forth and it tends to overwhelm the music at some points. I like both styles but it seemed to have been a challenge to find it’s proper place in the mix. Whether new vocalist Daniele will employ the same style(s) remains to be seen.
For a 7 piece act they definitely show restraint in not having too much going on at one time but enough to get your folk on between the metal riffing. The tracks average about 7 minutes in length which is hard to do but Dyrnwyn keep it interesting enough to sustain the songs with time changes, slower/faster parts and tons of riffs.
The lyrics are in Italian but it definitely is worth taking the time to translate them to get the subject matter of the songs. All in all, this is pretty solid all around from musicianship, songs and production, I definitely see bigger things down the road from this Italian clan…