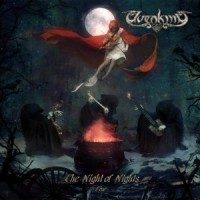 What would you like to have, when you’re a fan of a band? Loads of good stuff from this band? Sure, I would!
Well, you better join the elvenlegions and become a fan of Elvenking. They just released a DVD/2CD, when this is dropped off in you mailbox, it’s filled with a nice thick pack of nice platters. When you unfold this package, you’ll find a little booklet with bandpics, which you can take a quick peek in. You’ll need a lot more time for the rest. 2 CD’s, containing the registration of their concert in Pordenone, Italy.
Then there’s the DVD of course. On this DVD you’ll find the same concert. And in their 18 years of existence, these Italians Power Folk-metallers have made a large number of nice albums. They’re one of Italy’s most popular folk-metalbands and that shows in this concert. A large fanbase (elvenlegions), some nice adds in the form of a few lovely female singers, the band has made this a nice feast for this occasion.
Of course all their hits are played at this concert, just take a look at the tracklist and you’ll see, you don’t have to miss out on your favourite song. So, you can shout your longs out with ‘Pagan Revolution’ and ‘Elvenlegions’, put out the light in your room and sway with your candle at ‘Skywards’, join the fun in ‘Seasonspeech’ and eat you’re heart out you wasn’t there with ‘Through Wolf’s Eyes’.
But one thing is for sure in the end you won’t regret you have bought this masterpiece. They only think you regret in the end is you weren’t there when it was recorded. But don’t be afraid you can always pay them a visit when they’re in your neighbourhood.
When all this is done and the band left the stage, the DVD keeps on spinning in your player because the band added some nice videos to this album.

So, this is absolutely a ‘must-have’ for the fans, and for every folk-metalfan this is a VERY nice add to your collection. Over 2 hours of power folk-metal, simply something which you have to own!!! With this you can create you own ‘Night of Nights’ whenever you like!!!