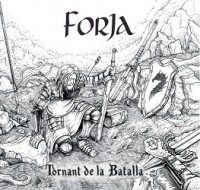 For those of you looking for that authentic folk metal with a touch of medieval/traditional music then look no further than Forja from Spain. While not as medieval as say Ad Plenitatem Lunae from Italy, Forja’s sound is somehow reminiscent of them to me, but certainly contemporary and not so rooted in the old style/instruments. I dusted off my digital copy (not really, it’s on the computer) of their original demo from 2013 “Desperta Ferro” and remembered that the “demo” was basically a full length album, kudos for that. Their style on that was slightly unhinged.., best word I could come up with. Vocals and music a little all over place but still a decent listen.
This new release “Tornant De La Batalla” (“Returning to the Battle”) features 5 tracks (intro plus 4) and shows that Forja is more focused than ever. I believe having a solidified lineup is a big reason….lots of additions and departures over the last few years in the Forja camp. Founding members Marti (vocals) and Albert (keys/flute/bagpipe) are now joined by Nil (guitar/accordion) Saus (drums) and Bianca (bass) and this lineup seems to gel quite nicely on this new release. Marti’s vocals are unique as it stays in a higher register and does not dip below into the guttural/death style as some vocalists tend to do and that lends to their signature sound.
I guess I would call them power folk at the end of the day especially on this release where Elvenking and maybe some older Baldrs Draumar and Mago De Oz shine thru. The 4 primary tracks average about 4 ½ minutes or so which works for their style and they pack guitar solos and tasty riffs, punchy bass and drums into each one along with some pipes and folk flashes. A pretty enjoyable listen all in all with decent production, solid musicianship and songwriting skills. Let’s see if they can remain in this configuration and put together a full length of this quality in the near future.