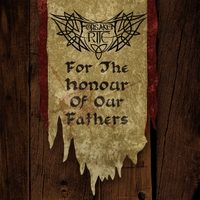 Canada certainly has its share of amazing folk metal acts with many hailing from the eastern part of the country (Vesperia, SIG:AR:TYR, Battlesoul, Trollwar, Distoriam, etc.) and a few from the western reaches. Now, specifically from the province of Alberta (home to the mighty Trollband and Mongol amongst others) comes forth Forsaken Rite with their debut EP entitled “For The Honour Of Our Fathers”.
The EP features an intro track plus 5 others and clocks in around 32 minutes or so. I wasn’t exactly sure what to expect and was happily surprised to be pummeled by the combination of heaviness and folk, as the guitar/bass/drums is not super-fast but laid on thick with hell spawned vocals and sprinkled in keys and flute. Closest bands I could mash together were a combination of Helsott, Aether Realm and Winterhymn as the Forsaken Rite sound reminded me of these 3 bands, but they are definitely are folkier and probably a little more straightforward metal than any of these 3.
The main tracks average around 5 minutes with their album closer/title track being almost 10 minutes in length and is their most ambitious work. I think their overall sound works best with the longer tracks where they build the mood with the flute and keyboards adding a creepy feel like in “Unsung Heroes”, being almost subliminal as they are always there but very subdued. “Way Of The Old Ones” would be my favorite track if I was forced to pick one (all the tracks are on par this one) but I feel this track was the most concise and best personified where Forsaken Rite put it all together the most in one track.
I think what hurts this EP the most is the overly treble driven sound and lack of bass, the guitar and drum sound while heavy is also razor thin and inhibits what could certainly be a more powerful recording. Luckily the epicness of Forsaken Rite shines thru despite some mix and production flaws. A remix of this would certainly be in order in some point, debut album maybe? I am sure they will take your head off with their combination of heavy riffs and folky flashes in the live concert setting and this EP does a pretty good job in conveying what they are all about for sure.
Look to the west, Forsaken Rite is looming on the horizon, ready to invade your village with berserker rage, lock your doors and hide your mead. Solid debut effort.