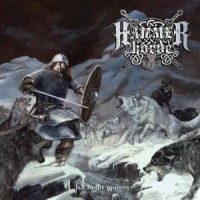 Let’s get this out of the way. I am a huge Hammer Horde fan and there was no doubt in my mind this would be getting a high rating from me, unless they did a 180 and changed styles completely.
That being said, they have continued in their classic form with their 3rd full length release entitled “Fed To The Wolves”. Even before listening, they probably have album cover of the year wrapped up with Kris Verwimp’s amazing artwork (or his Månegarm or Forefather covers this year as well vying for the title). The obvious question before listening would be how new vocalist Brock Bickelhaupt would fill the massive void left by departing front man Tom Sturniolo. We had a preview with the release of the single/video for “Unholy Harbingers Of War” so we could all rest easy in the fact that Brock seamlessly blends his style into the Hammer Horde sound while being reminiscent of Tom’s vocal approach.
A couple of negatives to get out of the way before proclaiming the greatness, disappointingly this is their shortest album to date at just under 37 minutes (previous two albums were approximately 1 hour long). With only 8 tracks we then only have 5 to really delve into as 2 of the tracks are instrumentals and a cover song, more on those shortly.
Album opener “Starborn” announces their return and after numerous listens I keep going back to the fact that HH seem HEAVIER than before, is this actually possible? Whether it is a tuning change or the fact that I perceive the overall riff style to be less busy than their previous albums it just seems to be more brutal than “Under the Mighty Oath” and “Vinlander”. There are still all of the omnipresent aspects of the Hammer Horde sound, Ryan and Derik’s amazing guitar tandem, pounding rhythm section of Jason (bass) and Jayson (drums)and of course, great song-writing. One trademark portion of the sound that is still a huge part is Derik’s vocal contributions, even though probably considered “backing” vocals, his clean style contributions add another layer of interest and help differentiate their sound even more. Not to go song by song here, it will just suffice to say that Hammer Horde have written another amazing album. The instrumentals “Orturn Aurorae” and “As Embers Fade” are decent although short (1:30-2:00 minutes each) and my biggest gripe again will be this is too short and I wish there were a few more tracks to listen to…, OK so I am being greedy. Lastly (and surprisingly to me) they have decided to Hammer Horde-ize the classic Manowar track “Hail and Kill” from the epic “Kings Of Metal” album. I wasn’t sure how this would go and I thought of numerous other tracks possibly better suited in the Manowar catalog for them to give a shot at covering (“Kill With Power” or “Sign Of The Hammer”, too obvious??) but they have done a commendable job and it definitely has grown on me. I could argue that this is a glorified EP given the length/tracks but any Hammer Horde new material is welcome any time no matter what, next album had better be a double LP concept album or something and world tour to follow, another killer album from Ohio’s favourite sons.