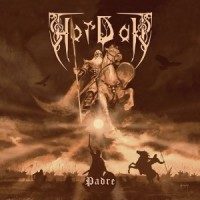 Spain’s Hordak are returning in 2016 with their 4th full length entitled “Padre’” (“Father”). Featuring yet another epic album cover by the extremely talented Kris Verwimp, “Padre” will certainly quench the blood thirst of their existing fan base while at the same time gathering new ones with some additions to their sound.
I will let you debate amongst yourselves where they sit style wise, pagan or Viking metal? Probably the closest genres to put them in but not as brooding or black as most others as I find them to be pretty accessible, but certainly not commercial by any means. With “Padre’” they continue in expanding their arsenal with some more folk mixed in and honing the blade on their Celtiberian sound. If I had to give you some direction where they sit with me, I would say they remind me a lot of Primordial or Forefather and as if by fate, they have tapped the mighty Wulfstan (of Forefather) to contribute vocals on the track “Bloodline Of The Wolves” making my comparison that much stronger.
What really struck me on this was that overall track length was shorter (5 minutes or so) as opposed to say their last album “Under The Sign Of The Wilderness” from 2011 at almost 6 minutes per track. The tracks seem more concise and not as overworked or tapped of ideas and have more impact, don’t take this the wrong way, I just think the songs are stronger in the shorter lengths on this release. There are still a couple of longer tracks (“A Leader In Times Of War” and the title track are both over 6 minutes) and these work better here now mixed in with the shorter tracks, a win/win situation.
They have also included a nice instrumental (“Sol”) to help breakup the album up in the middle. The production is also probably the best of any of their albums with a fuller guitar sound and a more powerful mix that finally matches the music and gives it the punch it deserves. If you have burned yourself out on Forefather’s “Curse Of The Cwelled” and are looking for something in the same vein, then “Padre’” would be my recommendation as the next thing to give a try. A solid pagan/Viking metal release from the Hordak horde……