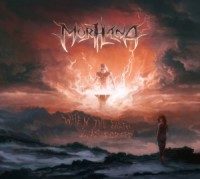 We have just received the debut album from Poland’s Morhana entitled “When The Earth Was Forged” and it has been a long time coming. In existence since 2006, it has taken quite a while to get to this point for Morhana and perseverance has paid off with a pretty solid debut. They have released a few demo’s over the years and songs from those demo’s appear on this 12 track album. In some respects this could be almost considered a “greatest hits” of all of their demo’s plus a few new tracks thrown in. Stylistically, I had struggled to come up with some bands as points of reference as it seems they have many influences or style comparisons so three that I could come up with were the folkiness of Winterhymn with the edge of Cruadalach and the riffiness of Accept, sounds intriguing right? The one thing right from the start is you need to pin your volume to maximum levels to fully appreciate this as it has some bone crushing riffs. There is an obligatory “Intro” which leads into the title track and the others to follow……prepare for the avalanche of killer riffs and floating violin and flute which both dance in and out of the tracks.
I appreciate the fact that the tracks aren’t super busy but streamlined and to the point making it accessible and easy to get into. “Mgla” highlights the clean style vocals as opposed to the gruff vocals of the other tracks as well as the most ambitious track here “The Traveller” at almost 8 minutes with female vocals having more than a supporting role. At 50 minutes or so (including the jaw breaking bonus track “Giants Of Ice”) the remaining tracks all have a similar feel to them but are different in terms of vocal melodies, who are singing them and vocal style, whether clean or heavy, male or female, super heavy or more acoustic based. It is almost like getting two albums (or more) for the price of one so to speak. Classic track “WTF” is probably going to give you the most folk and the most laughs of any song here, ..being their ode to boozing…, after all every band needs a good drinking song. All in all, an album that has something to offer the straightforward metalhead, the folkster and everyone in between.
Nine years in the making, “When The Earth Was Forged” is pretty successful as a debut album with a solid mix and production and songs that even being a few years old still have a contemporary sound about them. Morhana’s style to me seems timeless and diverse as this is an album that could have been released 30 years ago or yesterday and still fit into either era, that is a true testament to what they have put together here, a nice debut and hopefully we are not waiting too long for the follow up…..