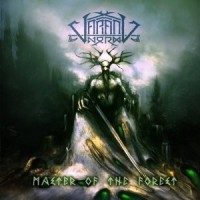 Viking metal fans should be in Valhalla with all of the great releases of the recent past (Månegarm, Hammer Horde, Wolfehorde, Immorgon, Valkenrag, etc) and now the official debut album from Varang Nord of Latvia has arrived. Their debut EP “Fire Of The North” (which I reviewed) showed some promise of more challenging material to come and distancing themselves from their previous existence as Балагуры. “Master Of The Forest” is not a huge step forward in terms of being vastly different than “Fire….” but it certainly has progression in regards to overall songwriting and band synergy. If you haven’t heard their music yet, I would compare them favourably to the Amon Amarth or Vanir style with a touch of the folkier Viking style like Grimner with the addition of accordion prominently throughout the tracks. They have issued forth 10 tracks here, all new ones presumably meaning none from the EP and totalling just over 33 minutes or so. While I thought initially that maybe longer tracks from them would be more in tune with their style, I am definitely changing my mind and thinking the 3-4 minute track length suits them just fine……when each song is this punishing in a short amount of time why write longer songs then? Tempo wise the songs for the most part are mid paced, chugging along but there are some blast beats mixed in to drive the point home in tracks like “Eagle’s Blood”,“Warchant Of Forests”and “Wild Freedom”. Vocals are of the melodic death variety with some choral/layered vocals used nicely as well. “Beer and Vodka” is probably the closest to a true folk metal track you will get here and definitely shows the light hearted and fun side of Varang Nord. I could have probably done without 2 instrumentals (album opener and closer “Warrior’s Song” and “Song Of The Forest” respectively) but that is personal preference. Production is tight and has a nice texture to it although the accordion sounds distinctly separate from everything……not the self-production’s fault as it always seems to just stand out on every recording. All in all this is a solid debut album and for Viking metal fans a debut to check out for sure. With Skyforger being the main folk metal band from Latvia and keeping the home fires burning there, Varang Nord can set sail from their shores to plunder and pillage, solid debut album.