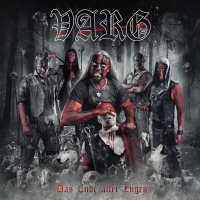 I will be the first to admit I never have really gotten into Varg for some reason and I have no idea why, it makes no sense to me either. When I saw a new album available coming out from them and the lukewarm review their recent EP “Rotkäppchen” got from my friend Rein here at the site, I was even further skeptical.
Thankfully, I am glad I gave this a shot as this is the best thing I have heard from them and it succeeds on numerous levels. First off, I have always wanted them to be either heavier or faster and this album has both, especially HEAVIER with a panzer tank guitar sound, thick and impenetrable and FASTER with blast beats galore. Secondly, maybe following the lead of Månegarm, this album is primarily in English (as opposed to their native German), not that this is a necessity for any band but I think if you are singing more anthemic style tracks, the messages need to be more universal and it certainly hits me with greater impact. Lastly, I think the general songwriting is their best yet with more complexity in the playing and riffs played by the guitars, bass and drums, layered with more thought into where each instrument fits in. Die hard Varg fans may be a little upset that this album may have more of a thrash feel as opposed to maybe the pagan/deathcore sound they are primarily known for but too bad, this album will make you spit venom and bleed napalm. From the opening intro/spoken word “The Great Dictator” right into the title track, Varg never take their foot off the gas….. one word…. RELENTLESS. Just when you think they need to stop with the pummeling blast beats and face crushing and catchy choruses at some point, they keep going. The tracks average around 4 minutes or so, quick bursts of shrapnel exploding in every direction. Even slower tempo tracks like “Streyfzug” “Darkness” or “The Dance Of Death” are so filled with the same intensity as the fast ones you don’t realize they are slower than the fast ones….just brutal. “Achtung” is probably the song I could hear more people going to the hospital for after getting mangled in the pit at the show. “Einjerher” and “Winterstorm” are as brutal as the first couple of tracks and they are almost at the end of the album. Album closer “Rain Of Ash” will take you down from your manic high and bring you back down to earth nicely, exhausted and spent from the rest of the album. The true test of an album is how quickly I put it in my car and this went in immediately although I can’t listen to it while driving….the urge to run pedestrians over while listening is too great. Too early to start talking about top albums of 2016? Not for me……”The End Of All Lies” is as big a surprise to me as any and comes right at the perfect time of year, neatly wrapped under the tree as their best album to date. Let the wolves run loose in 2016, amazing album from Varg!!!