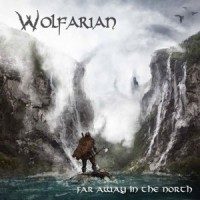 Wolfarian, a young folk-metalband from the Czech Republic has released their first album ‘Far Away in the North’. It was on our little pile ‘to do albums’ for a while, nobody in the Folk-metal.nl team picked it up. And I have to admit, I wasn’t very charmed by this album either. But after listening to it a quite a number of times, I have to admit, it’s much better than I thought at first ‘sight’.
After a two minute lasting prologue, the albums goes on with ‘Homecoming’. The music is quite clean, with male and female vocals, orchestrated with keys and with a nice flute and violin added to this to complete their sound. This all done quite well, but here and there you notice we have a young band on our hands without tons of experience and no label to back them up.
The ‘talking’ piece in the nice track ‘Shade of Victory’ isn’t something I like lot, the song would be better off without this piece, and when they go on in the style in the first part of ‘Sky of Waves’, I’m frightened for a minute, this is one of their trademarks as well. But fortunately it isn’t and they go on with what their good at. The grunts in this song are very nice add, it gives their music a powerboost, which is needed here and there. The sound of Wolfarian tends to get a little bit too lovely.
One of my favourite ‘tracks’ is ‘Clemency’, not a very loud track as well, but with very nice violin and flute. It’s too bad it’s quite short, but the following track ‘The Parley’ is another very nice one, with somewhat harsher male vocals, contrasting nicely with the clean female vocals. Reminding of bands like Kivimetsan Druidi.
The album ends with the over 8 minutes long track ‘Valhöll’ (Valhalla), a nice track with enough alternations to keep this track interesting, a nice story unfolds, but more interesting is what the bands manages to do with this track. Everything which Wolfarian stands for is in this track, some nice orchestration and choirs are added and I much say they give it all a nice slightly more bombastic sound at the end.
When all this is done we get a nice instrumental bonus ‘Morrigan’, with lots of flute.

In the end I’m glad I have listened to this album this many times. Had I only listened to it once or twice, I would probably have put in on the pile ‘not very interesting’, but after listening to it this many times, the album has grown on me. And I can asure you, ‘Far Away in the North’ is a lot more interesting, than I thought at first sight. It’s an album I like to listen more often, that’s for sure. And maybe even more important, I’m very curious about this band in the future, because there’s certainly a lot of potential in Wolfarian.