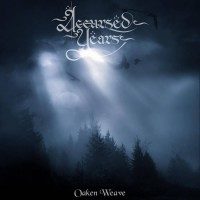 Just when you think all folk metal comes from Eastern Europe, five English men and one English woman release their first single. No EP or semi-album, just two songs, ten minutes. Enough to get a taste of what the band is about. Which subgenre would describe their music the best? They call it Melodic Death / Folk Metal or True English Slack Metal themselves. I can relate to that in the sense that their music is not very typical folk metal or melodic death. Plenty of guitar in the foreground, a lot of room for the vocals and keyboards for the folky melodies. Both songs have a moderate speed and a sombre feel to it.

The vocals sometimes remind of Tomi Joutsen of the legendary Amorphis. The melodies are not unlike Suidakra. Not as good as these bands by a long shot, though. Especially the clean vocals often miss the right tone. That issue really should be addressed. Grow to be a better clean singer, or stick to the harsh vocals you are much better at. And how can modern bands not get a better sound? I can not understand that in this day and age the drums have to sound so dull.

In short. Good: nice melodies, the harsh vocals. Not good: the sound and the clean vocals. Can go either way: variation within the songs. Interesting enough to wait and see what more Accursed Years will bring, though.