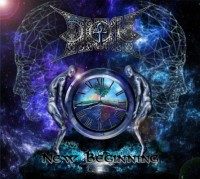 As we continue to sift thru the leftover releases from 2015, we have the debut album from Hungary’s Ankh entitled “New Beginning”. With a title like that I wanted to hear where they had come from before this potential new beginning. I jumped into their EP from 2012 “Tükörterem” to see where they were then to where they are now.
Given their name I wasn’t sure if they were going to play Egyptian or Sumerian inspired death metal the first time I grabbed this, like Nile or Melechesh but I was surprised they are folk metal with some symphonic, power and melodic death influences. (Ankh is an ancient hieroglyphic meaning “life”). I suppose they have a similar feel to country mates like Dalriada on the folkier side and Kylfingar on the black/death metal side so they fit somewhere in between the two. The songs are sung in English which will have a broader appeal for sure and having both male and female vocalists.
They have taken two tracks from “Tükörterem” (“We Are Gonna Fall” and “The Longest Journey (Part One)”) and refreshed them to fit in with the remaining 10 tracks (2 instrumentals and 8 regular tracks). I initially had a little trouble getting into this for some reason but then it started growing on me after repeated listens, some catchy riffs, punchy bass and tasty keys were readily apparent in each song along with all of the other obviously great musicianship and tracks. There is a touch of quirkiness when it comes to the soloing and musical directions, sounding a little like some old experimental thrash. When they go up tempo is when they are the most appealing to me, sounding like my beloved Grimner probably because of the flute playing and not the lyrical subject matter like on “Night in the Forest” amongst others.
I think they could have shortened the album a little bit from its 60 plus minutes and it would have been more powerful but all in all a pretty solid debut album. Production is relatively neutral and doesn’t distract or augment what is happening hear, again solid. Need a safe bet for a good all-around folk metal release? The latest album from Ankh fits the bill.