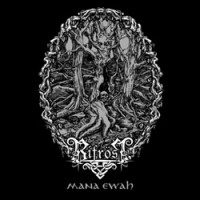 Once you’ve found the right Bifröst, there is no mistaking where these Austrian band get their inspiration from. Battle, kings and queens, betrayal, Vikings, death, love and hate. In their ten years of existence Mana Ewah is their fourth full length album. True to their roots, it’s pagan metal, with a bit of folk and black on the side. It’s not very different from their previous albums. It’s not worse, but not much better either. This is what they do. They don’t take pagan metal to a new standard. On the contrary, they produce another standard pagan metal album.

Is that a bad thing then? Not in my book. It just keep them from being noticed a bit more. I had the pleasure of seeing them twice in 2015. Once at Dark Troll Festival in Germany, where they got the crowd going and created a nice party. The other venue was in Holland, where the band was equally enthusiastic, but the crowd hardly responded. Maybe that’s the sort of band they are. If you like their style of music, Bifröst will produce the goods every time. If you are not really into trve pagan metal, they won’t raise your heartbeat to a dangerous level.

A look at some of the songs. Starter ‘Himmelsfall’ gives us bagpipes, mid-tempo, clear guitar riffing and melodies, amidst growling and shouting and a thumping double bass. Not bad at all. Next song ‘Verräters Geschick’. Acoustic intro. Then the speed pedal hits the metal, ehm so to speak. The speed varies a few times, another fine melody from the guitar. I like it! The title track ‘Mana Ewah’ is less interesting, primarily because of lack of variation. How come title tracks or songs named after the band name are often so bland?

The other songs bring us more of the same. Only ‘Im Todes Angesicht’ stands out. Close to black metal and yet with room for melodic bagpipes and flute and varied vocals, this is one of the best songs the band have ever made. Singing in German helps to create a nasty atmosphere. If they ever choose to stray from the standard pagan metal that they are known for, this is the direction in which Bifröst could be better than most bands.

Pagan metal lovers who like Ensiferum and Equilibrium will like this album. They won’t play it every day for the rest of their lives, though. In a niche that is rapidly decreasing Bifröst may want to take a little risk if they want to be a bigger band. But if they are happy to be what they are, they will also get my vote. They are good enough at pagan metal to keep me interested, in spite of changing preferences in the modern age.