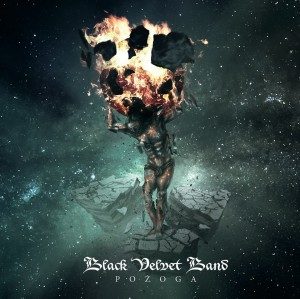 Judging by the band’s name you might expect a hard rock band or maybe even something jazzy. Don’t worry, no place for such nonsense. A proper folk metal band. Not because of the use of a lot of ancient instruments, but because of the use of folky melodies, acoustic guitar between the distorted guitars. Singing in their native language this is the second album of this Polish quintet. Style wise it’s typical East European folk metal. You’re down on your luck, walking in a forest, watched by goblins, it’s raining, but you don’t notice it. That kind of feel.
I have to be honest, it took quite a few times listening to the album before appreciating it. My biggest problem with it, is that it is rraatthheerr ssllooww. I know, it’s a matter of taste. I am an impatient man, when it comes to folk music. No speed is no fun. But hey, maybe we can call it doom folk metal? Then you may even like a song like Kołowrót even when I don’t. A similar problem is the length of the songs. The shortest is 04:51 and the longest 11:49. There is just not enough vatiation within the songs to keep them interesting.
Then again, there is enough to be liked. The singer is one of a kind. Clean, yet powerful, without becoming your average AOR singer. He brings a distinct quality to the band. So does the bass, clearly in the foreground now and again. Most songs have a little special bit, that catches you by surprise. The acoustic parts on Nowa krew, a nice bit of old school heavy metal guitar solo on Nie mamy skrzydeł, a very fast bit on Zamieć. Having said that, these special bits sometimes are out of place and don’t contribute to fully understanding the songs and indeed the album.
Not my album of the year by a long shot, but I think I will listen to it some more. And maybe it will grow on me some more yet.