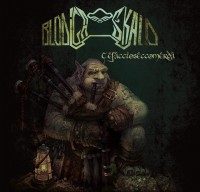 Even though 2015 is in the rear view mirror, we still have some releases to review from the last year and we have what I can only assume is the debut EP from Italy’s Blodiga Skàld as I do not think there is anything preceding this. This neat little 4 song debut will hopefully be on constant repeat at only 15 minutes or so, not necessarily because it is short but because the tracks are catchy.
With no barometer of what they would sound like and thinking of other amazing Italian acts such as Selvans, Kanseil, Ad Plenitatem Lunae, etc I was wondering where they would fit in, answer is probably none of the above. Blodiga Skàld (I can assume is Bloody Poet?) plays a blend of high octane troll folk metal, need further directions? Drive straight towards Finntroll, make a right at Trollfest, a left when you see Svartby and Abracadabra you will be in the general neighborhood. The songs all set up quick and have that quick “get in and get out” style to them, when the longest track is less than 4 ½ minutes there certainly is no time to mess around. The tracks are all driven by almost blast beat tempos, thrash riffs and maniacal keys/accordion overlaid with guttural vocals…..a winning formula for troll metal indeed. No need to go into each track as the EP disappears in the blink of an eye but that’s OK because the repeat button works just fine on the computer. Some of the keys/accordion and guitar parts sound a little disconnected from the rest of what is going on but not to the point of ruining what is going on, which is a promising debut and one that could lead one of two ways.
Either the next Blodiga Skàld will be along the same lines as this or the tracks will get a little longer, whatever the case hopefully they don’t deviate too far away from what they have done here as this is a nice intro into what they do, a little off kilter troll folk metal, not too swampy but with enough weirdness to tickle my fancy……