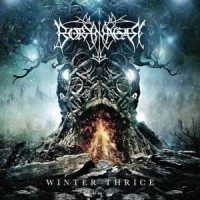 I am done flipping thru my thesaurus to find superlatives for Borknagar, let us just say that twice they have been my album of the year (2000’s Quintessence and 2012’s URD). Unfairly, they will release their new album “Winter Thrice” in January of 2016, rendering all other releases powerless to become 2016 album of the year for me (well, there are still 11 1/2 more months to go so I may be hasty).
For the uninitiated, Borknagar started with black metal intentions in 1995 and over time has become indescribable as far as a metal sub-genre for me…..still heavy but not really black or death metal, progressive but not pretentious and overly complicated, not really folk, pagan or Viking either, I give up as they cross into too many styles to really say they are one or more of any of them. One thing about every release is how they are able to both sound older than time and also far into the future, transcending a specific time in space where they belong. Riding a metal Möbius strip has never been more enjoyable……never ending and a constant journey of musical ecstacy. The only other band that comes to mind with a similar trajectory to a much lesser extent is Amorphis but I think closer would be Enslaved but the difference is that there are not the cutting of ties to some of the older material with Borknagar, whereas Enslaved have distinct periods in their history, Borknagar have always just been Borknagar where older and newer blend as one unified all-encompassing Vortex (yes pun slightly intended). Yes you have heard the two tracks/videos already released (“The Rhymes Of The Mountain” and “Winter Thrice”) and yes you have been staring at the incredible artwork by Marcelo Vasco (Slayer, Machine Head and Borknagar’s previous album “URD”) and that is certainly a nice primer for what is to come……more mind bending rifftastic, soulful, harmonious, proggy, heavy and disarming tracks, 6 more in total still having the metaphysical and nature subject matter and feel in each one, some heavier than others with blast beats and other more subtle with layered vocal and key harmonies but equally heavy. It is hard to tell where Oystein G. Brun ends and his bandmates begin as they weave in and out of each track. Where OGB lays the “framework”, the rest complete the artistry with their specific talents, Vintersorg’s relentless vox, ICS Vortex’s slithering bass and soaring vocal lines, Jens Ryland’s most underestimated guitar playing ever, Baard Kolstad’s science of percussion and Lars A. Nedland whose keys and vocals are absolutely mind altering.
“Noctiluecent” is probably the most adventurous track they have done to date, shorter and stripped down, very introspective and yet again still Borknagar. Album closer “Terminus” “When Chaos Calls” and “Erodent” border on supernova with every passing second and then come back safely to earth…..”Cold Runs The River” and “Panorama” are probably more tethered to reality, drifting thru chasms of riffs, keys and vocals, yet each track can feel either other worldly or in the nearest forest……you decide and pick the place it takes you. At 50 minutes or so it has the right length to be interesting and not get bogged down and exhausting. Production and the mix are transparent and natural like you are there listening in while being recorded.
Yes it is January and Borknagar have already claimed album of the year for me (at least for now), good luck in anyone dethroning them, it will be a long trip up the mountain to try and knock them off… ”Winter Thrice” is the soundtrack to an age of discovery whether physical or mental, past, present or future and either here or in another world altogether.