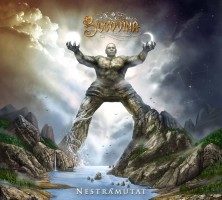 I believe I read somewhere that the new album from Bucovina was going to be different than their previous efforts with some sort of direction change, could be either good or bad, you just never know, their Bandcamp page said “most experimental” album. I was hoping not a big departure as their last album “Sub Stele” (“Under The Stars”) from 2013 was pretty decent and luckily I may have been imagining things with the drastic change or maybe they perceive they have changed but not really too much.
With “Nestrămutat” (“Underestimated” is my translation) I think there is a slight difference in the songs being a little more accessible and catchy with some slight diversity in tempos and styles this time around. For those of you looking for a Negura Bunget or Syn Ze Sase Tri connection here sorry to disappoint you other than that they all are from Romania. While those bands lead towards black metal if anything, Bucovina is more straightforward metal with folk, power and pagan touches.
The album features 8 tracks (intro plus 7) totaling 31 minutes or so, average song length is around 4 minutes so a quick listen. I would say that this was a hard album for me to get into initially but started growing on me with repeated listens especially with some of the later tracks. I would say overall that Bucovina has “played it safe” with this release…..there seems to be some confines to their sound and to not venture to far “outside the box” so to speak. If you are waiting for the tracks to blow you away, you will have to keep waiting, the album is good but doesn’t deliver the “take your breath away” moment at any time. I think the shorter track lengths were an indication to me that the songs were going to be simpler this time around, tracks on “Sub Stele” were 5 plus minutes on average and more ambitious with more of an edge to them. While I certainly was not expecting “Sub Stele Part 2” I certainly was expecting progress from this release…..either more chances with song style or speed or additional instrumentation or whatever.
Overall, this is an album with solid musicianship and production but not one that will tear your head off, bring tears to your eyes or possess you at all, a decent album still worth checking out.