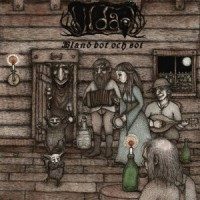 Swamp metal fans rejoice as the first full length from Illdåd has just washed up on the shores of the murky forest bog. “Bland Bot Och Sot” can trace its lineage to the debut EP released in 2014 (“Gröttlefar”) and continues to muck it up in a way only Illdåd can. There is barely a hint of joy in this release at all, like maybe a other swamp metal releases would have, this is dirgey swamp music that you could hear a troop of orcs marching to.
It has hard to pinpoint everything that is going on thru the fog here….keys/accordion/violin and mouth harp that never come close to humppa but sound more like funeral based and belched vocals inspired by the troll king. Guitars that sound like they are played thru an old tree stump, forlorn female vocals and odd drum beats and styles, the soundtrack to you getting lost is what this sounds like to me or a yet to be filmed horror movie.
I guess old Black Sabbath stuck in the moors with a contemporary feel of other purveyors of slimy goodness like Svartby or Trollgasm will put you on the map to the Illdåd treasure trove. Of course Bersgvriden too, why you ask?? Main Illdåd musician Trollmania and Trollpung from Bergsvriden play together in Midvinterblot, both playing music from the swamps and keeping everything separate…..yes, divide and conquer. Keeping the tracks relatively short is the best thing going here with the exception of the 6 plus minutes of “Gruvmaja”…..the rest of the tracks are all mostly in the 2-4 ½ minute range which is the right length I feel as it sounds like every song is clutching to life with all they have. Tracks like “Fyllefader” and “Far” for example keep it super simple with sparse instrumentation while the majority of the rest are still basic percussion, guitar and vocals with folk instruments so not complicated by any means.
At around 31 minutes it is just enough to get your juices flowing and by juices, I mean high percentage alcohol from a home still you set up behind the house. This may not be everyone’s cup of tea as it is relatively low fi and not filled with a ton of over the top riffs and blast beats but I dig the homegrown vibe. Illdåd keeps it close to home with simple songs you would hear coming from the old witch’s house at the edge of the forest, she is waiting to put you in her pot.
Great debut album.