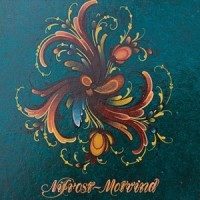 I wasn’t sure what to expect when I received the new Nifrost and had the idea that this would be some straightforward folk metal. After listening to the first two minutes or so it seemed I was right and then the black clouds rolled over the mountains and the darkness covered the land. Sorry about that, what I meant to say was that it has more of a black metal/melodic death/dark folk blend to it with some crunchy thrash riffs thrown in. Think of classic Satyricon or Dissection blended with a little Moonsorrow and Skálmöld and you may be in close proximity to the Nifrost formula although this is a traditional 4 piece with nary a folk instrument or keyboard in site.
This is pretty polished for a debut album and that makes sense as they have been in existence for 10+ years so if it wasn’t that would be a major concern. A little research shows that this appears to have been released previously in 2011 so I don’t know if there are major differences in the original release but it certainly doesn’t sound dated at all. With 10 tracks at approximately 55 minutes (you can figure out the average track length) this is a frozen treat that will crack your teeth.
From the opening epic 9 minute “Byrdesong” (“Burden Song” my translation) there are plenty of heavy mid-tempo and faster tracks here. I believe they are the most successful when they deviate from the majority of tracks, specifically on tracks like “Ferdamann” and the title track, they venture outside their normal template and add in some clean guitar and some additional touches…..it definitely helps break it up a little bit and make you pay attention more.
The musicianship and songwriting is definitely here I believe, just needs a little more diversity in what they do to really achieve more success. Chock full of heavy songs with really interesting choral backing vocals and decent production, “Motvind” is certainly promising. Let’s hope the next release is not 10+ years in the making…..solid offering.