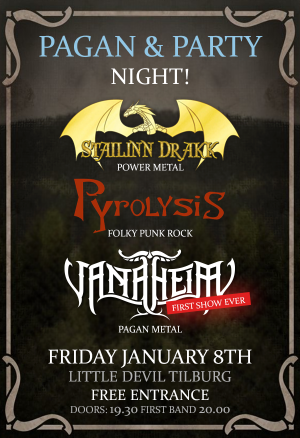 Vanaheim
A new pagan metal band from Holland is born. Not too many of those around, so worthwhile to check out Vanaheim. Best known member is Nick Roovers, former guitarist of folk metal band Druantia. And former reviewer for your very own folk-metal.nl. Beforehand described as a mix of Equilibrium and Finsterforst, there was no reason not to visit them. And where better than at Little Devil in Tilburg. At the early hour of 8 PM, there was quite a crowd already for their first ever concert. And the crowd was right. What a pleasant, if short, gig. Deep growls from Zino van Leerdam, guitar tandem Sonny Jansen (lead) and Nick Roovers (rhythm), drummer Bas Trommelen (really? A drummer called ‘drums’?) and amazing bass player Mike Siedel thoroughly enjoyed the crowd. And, what I like to see, they seemed to enjoy themselves as well. First song ‘From the dark lands’. Not a power metal song as you might think. Proper pagan metal, fast and furious. The same goes for ‘The dwarven chant’. Varied in pace and aggression. A lot of room for Mike to shine. Amazingly, the band only met Mike for the first time one day before the concert and he only learned the songs one week earlier! Zino jumping from the stage to start a mosh pit. A little pit, I admit, but the place is called Little Devil for a reason. Then ‘Waldschrein’, a cover from one of their great inspirators Equilibrium. Brought very enthusiastically. The crowd loved it. Last song of the night was ‘Bound between Times’. This may be the first time I use the word in a review, but this is an epic song if I have ever heard one. Over ten minutes long, taking you on a trip we thought only Finsterforst could deliver. So, is Vanaheim a mix of Equilibrium and Finsterforst? No, the song are more either the first or the second, not a mix of the two styles. I have no doubt this talented musicians will find their own style. And I have no doubt at all that that style will gather a troop of faithful followers.
Rating: 9/10

Pyrolysis
Folk Celtic Rock Metal, that must be Dropkick Murphys. Or maybe Flogging Molly. And indeed Pyrolysis is right up that alley. A singing drummer. I do not understand how people can do these things simultaneously, when they require such different skills. Respect. Right from the start, people are dancing and walking the Polonaise. More dancing than metal actually. Nicely done, good fun.
Rating: 7/10

Stailinn Drakk
Time stands still. Power metal at it’s most cheesy. Swords, dragons, storms, kings, fire, yeah baby, it’s all there. If you like power metal to be over the top, you will like this band. If you don’t, you won’t. This night the audience loved all the bands. Have you ever seen a moshpit during a power metal concert? I have now. I think the singer will make or break this band. His voice is very fitting for the type of music. But where the rest of the band is having a ball, he doesn’t take the lead. Be a bit more like Fabio Lione (put on some weight…) and join the fun, man.
Rating: 7.5/10