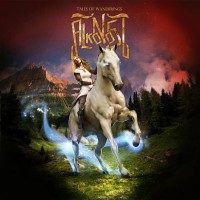 This year Russian Alkonost celebrate their 20 years of existence. Quite an accomplishment for a folk metal band. One of the reasons the band is still alive and kicking is that they never stop reinventing themselves. Always within the boundaries of metal the band have incorporated all sorts of metal in their music. Early days was dark folk metal, meaning a lot of room for black and doom influences. On ‘Tales of Wandering’ it’s mostly folk metal with hints of power metal.
And it’s not only the music that’s changed throughout the years. The band saw a lot of personnel changes. In fact so many, that I am not sure who’s exactly in Alkonost at the moment. Another field in which they vary is the language. Most albums are sung in Russian, but Tales of Wandering is entirely in English.

This version of ‘Tales of Wandering’ bring us eight songs. It’s a remastered and picture disk version of the album they brought out earlier. Their discography is a bit confusing, so it is hard to tell whether the eight songs are the same as on the previous version. No matter, though. Let’s have a listen.

So a bit of folk and power metal. Actually, the female singer often uses her soprano voice, throwing a bit of gothic metal in the mix as well. Does that work or are they without direction? It works. Definitely. Every song is different and stands on its own. It won’t be to everybody’s taste. If you hate Tarja’s voice, stay away. If you can’t stand galloping drums, get out. But if you are open minded enough to enjoy all sorts of metal, you like musicians who obviously know how to play their instruments, you like well structured songs and a good sound, there is plenty to enjoy. The female singer uses a regular voice alongside her soprano. Mind you, the soprano is hardly as convincing as Tarja, mostly because it is more fragile. More like the singer of Canadian power metal band Wildpath (who?). But it’s not bad either. A nice contrast with the male grunts. In this band every member gets his moment of glory. All the while keyboards add to a very full sound. Not relying on traditional instruments the keyboards help to create a folky feel.

Personal favourites are ‘Wonderland’ and Wind and Storms’. In these songs Alkonost is very comfortable playing at faster and more moderate speed. Where a lot of folk metal bands tend to stretch their songs to a point that the interest of the listener starts to wander, I wouldn’t mind if Alkonost would write some longer pieces. Now it sometimes seems that they have ordered themselves to stop within five minutes, while the story of the song is not finished yet. Would be nice to check out if they can bring the atmosphere of the album on stage.