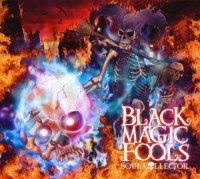 A musician who’s instrument was destroyed by some people with crosses, bought it back from the devil, but for what price? In exchange he had helped to spread decay and collect all the remaining souls…
I’m thrilled, when I returned back to my village and entered my house, I stumbled upon something on the doormat, a shiver went down my spine, what is it. I grabbed something from the floor and opened the package… it was a Soul Collector… one by the Black Magic Fools!
Ever since their previous sinister piece of work ‘A Jester’s Confession’ I had been waiting for their next album. This time it’s a full length ‘Soul Collector’, just like with their EP, it’s based on a sinister story. The songs on this album fit in the main frame of this poor travelling musician.

The album starts with ‘Fools Parade’ which is a little intro to the rest of the story, with bagpipes and violin all over it, what do you need more. with ‘Grave Dancer’ the album really hits off. The title of this songs says it all, you can really dance at this music, but the album carries a real horror-story as well.
In ‘Lies’ the Black Magic Fools make a statement. Don’t take all the lyrics in the songs serious, it are just jokes and songs. A nice statement, but is it? this is just my interpretation of the lyrics.
In ‘Salvation’ the musician realises what he has done and Pontus gives this song so much meaning with his vocals it becomes almost scary. And when you’re in this state, Katja and Ida slice you up with their delicious violins and if this is not enough you get a good guitar-beating by Daniel.
The musician can’t be silenced, not even by cutting his fingers and tongue, he seems stronger than ever even when they hang him high. (Black Jig) Eventually everybody knows they can’t escape and they decide get a last drink before they die in ‘Last Supper’. Black Magic Fools pull you right into their story with their strong compositions in which there is plenty of room for the authentic instruments, but when they pull back, the electric guitar is ready to slice you up as well.
Then again the contagious sound hits you in the title-track ‘Soul Collector’, I don’t care any more, let the Black Magic Fools take my soul….
After this we get two nice oldies from their previous album ‘A Jester’s Confession’, which is simply a very good song with it’s nice bagpipes, which fits very well in this album. And their greatest hit in my opinion ‘Dansa I Natt’ (Dancing the Night), I wonder if they have written another story which would fit this song just as well as the story on their previous release. This time the songs starts with acoustic guitar and hurdy-gurdy, the song is a little reworked with more orchestration in it, but it sounds again very nice. If I have to choose, I like the somewhat more raw first version better. The whole album has a slightly more polished feel, may due to a different producer.
The album ends with ‘Not my Truth’, another typical BMF song, and ‘Vädjan’ an easy, traditional sounding, track with female vocals. This last track sooths you soul after this horrifying story, a magnificent end of this album.

Black Magic Fools show, Medieval rock isn’t always about merry tunes and feast. These Swedish folk managed again to create a very sinister story, and wrote great music for this story. Great, they have again made a masterpiece with this album, I love it, take my soul…