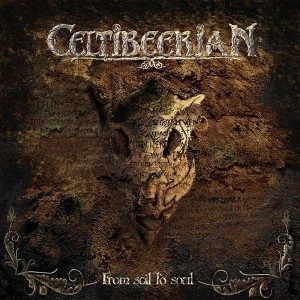 Celtibeerian released an acoustic album, an almost inevitable event, because their music has an ‘acoustic feel’ of its own. The band has showed in its previous album ‘Keltorevolution’ they make a fabulous use of all kinds of authentic instruments like viola, violin, bouzouki and whistles. When you add the nice restrained singing of Gus to this and the ‘relaxed campfire feel’ of some songs , it’s no wonder the band decided to take some songs one step further and record them in an acoustic version.
This album counts 6 tracks and they’re all taken form their previous two albums ‘Tirikantam’ and ‘Keltorevolution’. Not all songs grab me, ‘Unbury the Horn’ for instance is a song which can’t keep my attention. But they make this right in a lot of other songs.
Very nice piece of work of Celtibeerian, let’s lit a campfire, grab some mead and celebrate this nice album ‘From Soil to Soul’.