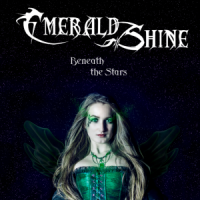 From the Czech Republic Emerald Shine make their debut with a four piece EP. First recordings are always interesting. New music, new players, maybe the first mini-album of your future favourite band. You never know. Having heard the EP multiple times I would give them the label ‘Follow’. There definitely is potential. The band may grow to make a decent name for themselves.
Judging by these four tracks alone, chances are they will be just another okay band.

No less than eight musicians in the band. Vocals ranging from clean high pitch female, clear and grunting male vocals. Instruments including two violins, flutes and a harp. Look at the harp player rocking away on their Facebook page. Fantastic! This is true folk metal. Folk metal as Wodan intended it. Guitars nicely distorted, heavy enough to be called metal, though with an overall light-footed feel. In the corner of Dalriada and other Eastern European folk metal bands.

What do we like? The melodies, the trueness of proper folk metal, the variety of instruments and the craftsmanship with which they are played. The song writing is not bad at all and the songs all differ from each other. The melodies stick in your head after a while without becoming annoying. What don’t we like? Well, if English is not your native language (and you are not from Holland), there is always the risk of bad pronunciation. Especially the male singer should stick to grunting, so that you won’t be too put off by his bad English. The other thing is, if you are a bunch of eight, you should all be heard distinctively. Do you really need two violins? Why can’t we hear some more of the harp? Such a beautiful and special instrument, but hardly any room to give this EP just that little bit extra.

Nice to have another new band om the scene. Curious to find out whether they can grow to be as good as the individual elements seem to promise.