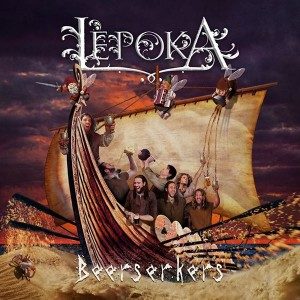 If you have been a diligent visitor to our site then you already know the Lèpoka name. Winners of our best debut album of 2014 (“Folkoholic Metal”), this Spanish horde has returned with their follow up entitled “Beerserkers” (I sense a trend in album titles here…..).
I think what really sets them apart is how they can blend the booze inspired tracks along with epic tracks and do both successfully well, most serious bands fail at trying to do fun stuff and vice versa. Lèpoka has continued in this tradition on “Beerserkers” with the party and serious tracks blended albeit with a longer average track length, their tolerance for alcohol fueled tracks has increased. This 7 piece act has enough metal for the metalheads and definitely enough folk for the folksters too, but never too over the top heavy or too folky, I guess that is why they have such wide appeal. They remind me of a blend of Alestorm, Skiltron, Kanseil and Forja, having a little bit of medieval vibe to them as well, even if it is subtle. The fun stuff is right up front with the title track, “Sexcalibur” and “Skal!” and maybe more serious stuff later on, they get some melodic death/power metal going on in “Ignis Deorum” and “Samhain”, maybe some pirate stuff in “1516” and “Carta A Maria” and then going all 10 minute plus epic with “Vox Populi”.
It is easy to see why they garnered such high marks on their debut as this one delivers the same diversity and intensity while still being pretty accessible. I can’t say they have blazed any new trails with this one but they have just stayed the path as the last one and if it isn’t broken, why fix or change it?
The album has adequate production but could maybe be a little heavier in the guitar and drums department as they are there, but not as bombastic as could be. Not sure which new folk metal album to pick up next? Grab yourself a copy of “Beerserkers”, it will be like buying 6 albums for the price of one, great follow up album from these Spanish metal merchants.