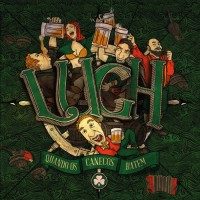 The debut Lugh’s album “Quando os canecos batem” (When the mugs hit) released in 2014 is a milestone in the Celtic Punk scene in Brazil. There are 13 tracks with a lot of energy, beers and beers.

Of course, there are a lot of traditional Celtic Punk influences, but with a blend of South Brazilian folk music, especially in the lines of accordion.

“O grito na noite” (The scream in the night) opens the album as a preview of all that will come, a festive atmosphere with great songs and choruses. You’ll probably sing even if you don’t understand Portuguese.

The album continues with a good sequence, with “7 mares” (7 seas) and “O que eu preciso” (What I need). “Dias atuais” (Nowadays) is a little different than the others but with “Chinaski” Lugh recovers the festive line and continues until the end.

Lugh has everything to increase the Celtic Punk scene in Brazil.