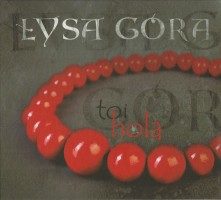 And once again something curious popped up in our mailbox. An album by Łysa Góra, well, that’s 1-0 for them, they know us but we didn’t know them. Not able to listen to it at once, I looked them up on facebook. This learned they are making WIEŚ METAL, 2-0 for them, I’ve never heard of this genre, google translate digested it for me and ‘Village Metal’ came out. I don’t know what to expect with Village Metal, so a soon as I had some spare time, I put this album in the player, and turned my head to the speakers, anxious to hear what comes out.
Well, traditional Polish folk-singing comes out, at least that’s how it sounds to me. I like this kind of singing, I imagine these people at the square before the local inn, singing their chants. Very nice, I like this kind of singing, but metal…. well, no.
But after 2 1/2 minutes not only flutes get involved, but a little bit of solid guitar as well, is there more to this album ‘Toi Hola’ when you dive in deeper? Yes there is, the second track ‘Oracz’ starts with solid guitars. Despite the fact it’s the music is loaded with the traditional folk-singing, the music is quite solid in a lot of places. The guitars vary from, easy finger-picking to very solid arrangements. The tin brittle sound of the flute, and heavy hammering bass are bringing more contrast into the music. I close my eyes, to determine what I’m listening to. I picture a picturesque Polish village, with a bunch of young people in traditional clothing, but with their hearts in the world of heavy rock and metal music. How would you describe this…. Village Metal! Oh damn, I’m feeling stupid they beat me once again.
This album is filled with these kind of nice songs, not 100% all the way, but within the songs they vary form folk with solid rock, too folk with metal, always 100% folk.

When you’re deep into folk and you’re up to something new, listen to Łysa Góra. I bow deep for them, because they managed to give folk a new dimension. When you think you have heard it all by now, these Polish guys take the stand and let you enjoy something completely new. The only downside of their music is I’m feeling a bit thrown back and forward between the folk and the heavy part of their music. I like that sometimes, but in other moments it could be blended a little more, but maybe this is due, to the fact this is so refreshing I get to get used to it.
‘Toi Hola’ is a very nice album, and I hope we can hear some more of Łysa Góra in the future.