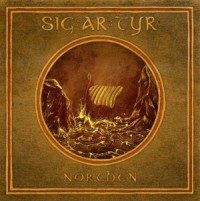 While we all should be celebrating what would have been Quorthon’s 50th year on Earth, it begs the question….”What would he/Bathory be doing if he were still with us today?” I believe there are a few projects that continue in his legacy and carry it forward……Falkenbach, Wotanorden and most notably Canada’s SIG:AR:TYR. I find it hard to believe that it has been 6 years since the EPIC “Godsaga” was released as it is still in my heavy rotation of albums to listen to.
It seems timeless like it could have been released yesterday and still be as powerful as it was when it first came out. “Northen” takes the foundation of “Godsaga” and while reminiscent in some respects carries it to the next logical progressive step as have all of their releases. I fear that some may listen to this and want a “Godsaga Part 2” and be disappointed at the overall feel of this as it may not be as “heavy,” “black”, etc. as “Godsaga” but to me “heavy” is a relative term, the music may not have to be heavy if the message is or can counterbalance each other to become heavier.
“Northen” has a more personal feel to me and a transparency which is readily apparent, this honest and uninhibited approach has made this SIG:AR:TYR’s “heaviest” release and heralds in a new era in Viking metal. The album that this struck me like was Enslaved’s “Eld”, bringing back memories of how different and groundbreaking this album was at the time in ushering in their change to future incredible albums. While this is still “Viking” metal it has a pretty traditional heavy metal feel to it, not tethered so much to the melodic death trappings as most Viking metal is. The riffing is what makes this unique in the genre, the riffs don’t strike like the sword blows in battle but more like the strike of the hammer on the anvil, crafting and thoughtful. The guitars wax and wane between electric and acoustic, both suited for the telling of the story (whether the main riffs or screaming solos) and fulfilling the concept of the album…..also I feel a trademark of the SIG:AR:TYR sound.
Vocalist/guitarist Daemonskald has never played or sounded more confident and is still behind all of the material both musically/lyrically. He has also collaborated with guitarist Mike Grund and drummer Nicholas Ireland from the mighty Battlesoul on a track here (“Skraeling”) with Vesperia’s Morgan Rider adeptly as always tackling bass duties. There are 9 tracks totaling over 65 minutes so you will have an average track length of 7+ minutes and every song is an integral part of the whole and not just filler. Brave and defiant, “Northen” breaks the stereotypical genre template and forges a new path. With Grimner’s latest release handling the “folkier” Viking metal and the soon to be released Skuggsja project covering the more traditional, SIG:AR:TYR are forging ahead regardless of what others may think, say or feel…… much like the Viking explorers who sailed across the oceans to find the ends of the earth. Luckily, the gods were watching over them on their journey…..another amazing album from SIG:AR:TYR