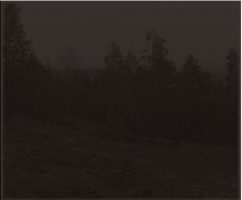 Sweden’s Utmarken is a new 6 piece with a debut album of the same name set to be released this spring. No demo or early single that I know of just right to the album and what an impressive debut this is. However it will raise some questions, both positives and negatives.
Negatively I would think that this may not be considered folky enough for some folks out there…..well they are completely wrong. With nyckelharpa aplenty this is folk metal, well, at least folk hard rock maybe closer. Sorry the songs aren’t humppa or black metal based but seem more rooted in traditional heavy/power metal with an intermingling of folk. Again if these are negatives then what are you doing listening to folk metal anyways?? Folk metal is extremely diverse and Utmarken are definitely finding their own niche in the genre. Upon initial listening I thought they had a very retro/progressive 70’s rock akin to Dio era-Rainbow, Rush, early Yngwie Malmsteen or German power metal in some respects. This opinion was especially based on lead vocalist and nyckelharpa player Mathias Gyllengahm soaring and amazing vocals along with accompanying harmonies. Yes not just vocalizing, SINGING. I know this concept may be amazing to all of you used to the various grunts, screams, howls, etc which we all love but Mathias can compete with any of today’s better folk metal singers, Nemtheanga of Primordial/Twilight Of The Gods maybe the closest comparison I have and as a matter of fact this reminds me a lot the TOTG album albeit folkier and not as brooding, maybe even a little of classic Rob Halford thrown in to. In the 12 tracks averaging between 3 and 4 minutes each you won’t find a lot of fireworks but a steady burn of powerful tracks played by talented musicians. From opening track “Strömkarlens Son” you will have a nice blend of today’s folk, hard rock and traditional Swedish music blended together with the right amount of each to become a unique standalone project.
Thankfully no overdone or too long tracks here just short, “get the point across” tracks, highlights for me were “Till Skogs” (“To The Forest”) and Vintern (“Winter”) but all tracks are on par with these for sure. Whether or not a follow up album to this stylistically would have the same impact is a question for the future as I don’t know if it would have the same impact a 2nd time around but for a first it certainly crushes. The nyckelharpa, as beautiful an instrument as it is, may get on your nerves a little bit again if the next album features it as heavily as this one does but that is personal preference.
Solid tight production with the right amount of heaviness and knob control certainly make this even better. With Månegarm winning our album of the year and Grimner EP of the year for 2015, Utmarken are leading Sweden again in the charge for one of the best releases of the year and certainly will be a contender for debut of the year without a doubt… great album.