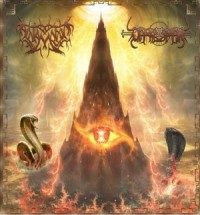 Previous ratings on our site were not very hopeful. Al Namrood from Saudi Arabia usually only score average points on every one of their releases. The only fact that they come from a region in which folk metal is rather rare was enough reason to follow their progress. But maybe it’s time we stop doing just that.

Two new songs on this split EP. The first is called Tajer Al Punqia I. The other one Tajer Al Punqia II. There must have been a wind of inspiration blowing through the Arabian desert when choosing the second song title.

Within 10 seconds of playing ‘Tajer Al Punqia I’ I found myself checking whether my computer was working properly. It sounded like there were two songs playing at the same time. The singer seemed to have his own ideas about what he was supposed to be doing. And to make matters worse, he is a very bad singer. He does not know how to sing in a clean way. He does not possess a decent grunt. He is a joke, really. But not a funny one. The second song is similar to the first in the sense that it is equally horrible. You don’t need to play this EP five times to recognize a failing effort to make decent music.

In fact, the song from Darkestrah is a lot more interesting than the songs from Al Namrood. This band from Germany, but originally from Kyrgyzstan, play standard black metal. Meaning fast paced, no guitar solos, a screeching voice with a bit of echo. No surprises. So calling this song interesting compared to the songs from Al Namrood really is saying enough about the latter band. If they solely rely on being from an interesting part of the world, they don’t stand a chance on surviving in the long run. No matter how brave they are for being a metal band in a metal-unfriendly part of the world.