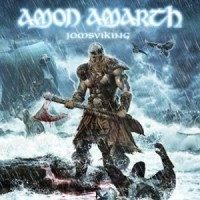 While we know they can’t be credited with inventing Viking Metal, we can certainly say with confidence that Amon Amarth are probably the most widely known in the genre. With an epic catalog of albums in their 20+ year history, they have delivered once again with “Jomsviking”. A few things before the review….
I have to say I wasn’t that into the last 2 albums too much for no particular reason (“Surtur Rising” and “Deceiver Of The Gods”) and so this album is making me go back and appreciate them now. I also can’t say I liked the overall sound of the last album (produced by Andy Sneap as is “Jomsviking”) but this time around he has gotten right…… a more natural sound, closer to the older albums while still being a more contemporary version.
Now on to the review……they have decided to tackle the dreaded “concept album”. Thankfully, the concept is there but not forced down your throat as songs can exist separate from the overall theme. There are 11 tracks at just over 52 minutes, around a 5 minute average track which is perfect for their style although album closer “Back On Northern Shores” tops the 7 minute mark. You have probably heard the first single “First Kill” already so you have an idea of what is coming….another Viking invasion indeed. I believe I would call this a very well rounded and mature album, not having to be super brutal all the time and adding some wrinkles to fulfill the concept.
Tracks like “Wanderer” and “One Thousand Burning Arrows” have more feeling and a tangibility to them then previous efforts and I think the years have made them find a better connection to the audience. There are numerous spoken parts by Johan Hegg here to help bring the story more to life and a killer duet with the first lady of metal, Doro Pesch (“A Dream That Cannot Be”). It is hard to pinpoint the exact changes here in their overall sound, maybe it is only a production thing because they are still as heavy as ever. With a huge US tour coming up with Entombed AD (they had better be doing “Guardians of Asgaard” with LG Petrov) and Exmortus, AA are definitely planning on retaining their crown as kings of Viking metal.
“Jomsviking” is a definite return to classic form while expanding their ideas and sound in the process…… time to conquer another unsuspecting foe. Another killer album from Amon Amarth.