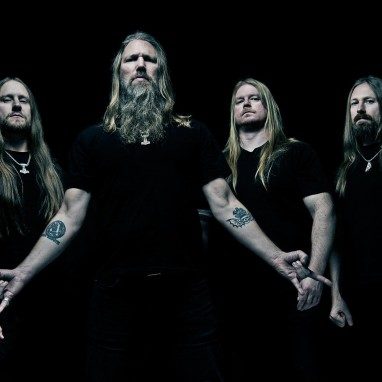 Today, the 25th of march, Jomsviking will unleash hell on earth. Yesterday we got a little preview with a unique Amon Amarth show. For years I’m a fan of Amon and have seen them grow from big venues to the biggest we have in the Netherlands. I’ve seen them on Wacken where even the infield was closed because too many people wanted to kick the shit out of each other or break their necks to these guys. Not this time, only about 250 people in one of the smaller venues I know. Glad even that number fitted in the Hall of Fame this evening.
Starting with the regular intro song Amon takes away with Pursuit of Vikings. All the way to the back people know every single line of every single song (except for the new album of course) so the whole show ended up in a big sing along with fists raised in the air at every line. You don’t often get the chance to see a big band like this perform in such a small venue so the main part of the crowd existed out of die hard fans. After also playing As Loke Falls they continue with some of the new songs. First Kill is the first of them, we of course all know it by now because the video-clip that’s already released. In my honest opinion, the best song of the new album. But to be very honest, I’m not completely convinced about the new album. So after hearing two more of the new album I was glad Johan told us they’d continue with a song about a traitor, a deceiver. We all know what happened. But with Deceiver of the Gods I also started wandering what was happening with the sound. Of course the Hall of Fame isn’t know for the best sound but up to that point it had been great. Suddenly all we could hear was drums and vocals, the guitars somewhere in the background. I fixed that problem for myself by moving forward towards the stage. Still a bit annoying for the people in the back I think. So how about some good old stuff right? Amon Amarth still found time for Cry of the Black Birds, Death in Fire and Thousand Years of Oppression in a row. Followed up by one of the best songs from the last album, Destroyer of the Universe.
With Runes to my memory than, the crowd got even louder than before. Every single person in the venue singing along as hard as they could. Was quite an epic moment.
One Against All and One Thousand Burning Arrows, two more new songs coming up. Leaving the band to play some faster songs again. Some friends of mine turned the centre of the venue into a big viking warzone destroying everything in their path the entire show long. Ending up with some all time favorites and a few of Amon Amarths greatest hits, Victorious March and Guardians of Asgaard, only split by the new full folk-metal drinking song Raise Your Horns. Closing a monstrous 19 song setlist with nothing less than Twilight of the Thundergod.

After all a great show, technically never perfect, never really new or refreshing, but always a big insane party you just wanna visit time and time again. Glad I could be there in such a small setting.