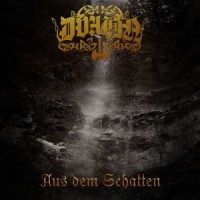 “All Folk-metal is the same, it’s all been done before’, a statement I disagree with with all power I have in me. I don’t think this goes statement applies to folk-metal more then to any other genre, a lot of bands and albums prove this all the time. One of those bands is Dvalin from Germany, not ‘just another’ folk-metalband, but one which has a different view at this music.
It’s all there, the guitars, the drums, the bass, the low grunting vocals, all is normal here. But the difference is in the rest, there are keys, shawms and hurdy-gurdy, but more then this, there are bagpipes everywhere. The music is dominated by bagpipes, like the way in which The Real McKenzies bring a different kind of Folk-punk. This bagpipes are very suitable for the authentic medieval tunes like in songs as ‘Skaldenfest’, but this is not necessary so. In songs like their single ‘Unter den Eichen’ the bagpipes are just as important, but they play a more modern role.
Dvalin has put 10 very nice tracks on this album in which they show they are a band to count in from the start. Listening to this album makes it hard to imagine we’re dealing with a band which released their debut with this one, of course there was a promo in 2014, but this is their first real release. No wonder NoiseArt Records signed this band at once, they’re refreshing and new. And by doing so, Dvalin had the opportunity, to get the maximum from this album, the production is nice, nothing is done hasty, it’s all just fine, like it should be.
Dvalin made a statement with this album, I say, they made several statements with this album. One of them is ‘Dvalin is a band to take into account, and they’re here to stay’. Another one ‘Folk-metal is not dead at all!!!’. They prove there are always bands and musicians who have nice refreshing ideas and luckily there are labels who give these bands an chance to live.
2016 has just started, but this album will definitely be in the race for the best Debut-album of 2016!
This is just an album you should have!