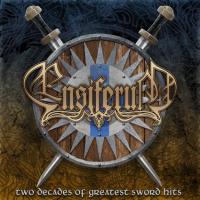 “Two Decades of Greatest Sword Hits” is the best of the victorious and powerful career of Ensiferum. Is not only a huddle of tracks, but I felt that the songs were carefully chosen (…and this wasn’t an easy task, because the band has six great albums!). Spinefarm Records made a great compilation of songs the band have released over the years with this label.

The Sword Hits opens with “By the Dividing Stream” and “From Afar”, from the album “From Afar” (the best album for me).

Of course, there are songs from the albums “Ensiferum” and “Iron” with the “genius” Jari Mäenpää, including the song “Dragonheads” from a EP of the same name. For many, Ensiferum with Jari on guitars and vocals was the best. Nowadays, Jari is on Wintersun.

For the closing, the chosen one was “Victory Song” (from the album “Victory Songs). This album was the first one with Petri Lindroos on vocals. In that time, the expectations for this album and the new vocalist were huge. Petri didn’t disappoint and still making an awesome job… and now we know that Markus Toivonen is the “mastermind” behind the band, not Jari or Petri.