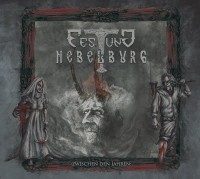 The fortification has been covered in mist since 2007, but Festung Nebelburg is back after 8 long years with a new album called ‘Zwischen den Jahren’. Back in those days the sole and only member of Festung Nebelburg, Nattulv played a little while in Wolfchant as well. He gave us a little surprise with his first album ‘Gabreta Hyle’, Pagan metal meets Black’n’Roll as he point this out himself.
He extends this style to his new album, which is again quite entertaining. The style is a bit like the ‘old’ Heidevolk, with even less folky elements. It has a folk-feel every now and then, but when you’re looking for full folk-metal, this isn’t the album for you. Do you like bands like Heidevolk and is there anyone out there who isn’t, Festung Nebelburg is something you should surely lend an ear.
It’s sometimes hard to believe this man is singing and playing everything, the clear multiple vocals fit perfectly, but this is no wonder, coming from the same throat. The songs are about old German believes and the Bavarian forest gives the songs this nature feel.

‘Zwischen den Jahren’ by Festung Nebelburg is an album for the fans of bands like Heidevolk, a fine album filled with decent songs. Nattulv shows he’s able to do it all, create nice songs, sing, play the guitar, bass…
Hopefully he doesn’t disappear in the mist for another 8 years, but will be back sooner with more of this nice stuff.